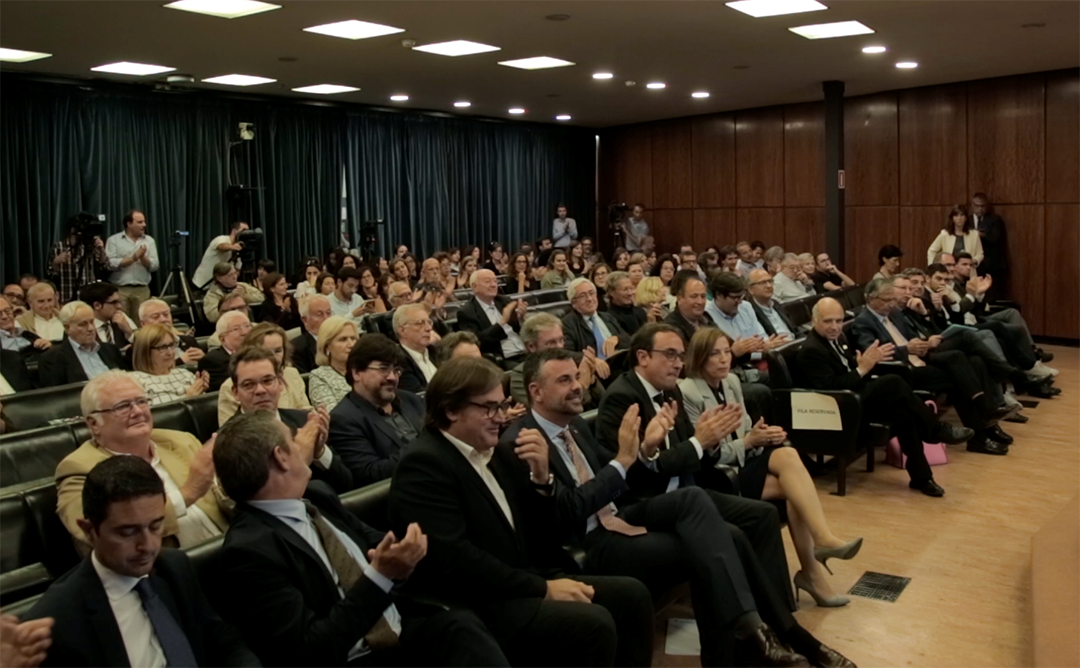 Imatge:
© Col·legi d'Arquitectes de Catalunya (COAC)
The Architects’ Association of Catalonia presented on 16 October the COAC Medals to Ministers Josep Rull and Santi Vila and President of the Catalan Parliament Carme Forcadell in recognition of their contribution to drawing up and passing the Law on Architecture.

Al The COAC Medals are the institutional honour granted by the Architects’ Association in recognition of the contribution made by an individual or institution to the progress of architecture or the Association itself. The Dean of the COAC, Lluís Comerón, noted that 'the Law on Architecture marks a turning point in consolidating the renewed mission of architecture, being more committed to the general interest'.

In the speech given by Ignacio Paricio, from Arquitectes per l’Arquitectura, he acclaimed the role of the medal winners, expressing 'the gratitude of the whole architectural community for your perseverance in passing the Law on Architecture and thus achieving a new legal framework which, amongst other things, includes beauty as one of the key criteria to be taken into account'.

The two ministers and the president of the Parliament thanked the COAC for the distinction and contended that it represented 'a recognition for the country'. 'There was a clear and enduring consensus in drawing up the Law on Architecture, and this needs to ensure that the law will be in force for a long time', said the Minister for Territory and Sustainability, Josep Rull. The Law on Architecture is seen by Santi Vila, the head of the Ministry of Business and Knowledge, as an element of the 'country’s modernisation agenda'.

Finally, Carme Forcadell, President of the Catalan Parliament, thanked the Catalan Chamber for this recognition and added that 'the Law on Architecture is a pioneering, modern and advanced law'

The presentation of COAC Medals took place as part of the institutional ceremony for distinguished members, which honours the architects who have been members for 50 years. Representing these architects, Francesc Labastida, who was dean of the Association between 1990 and 1994, looked back over the teaching of his degree course lecturers and the experiences he had with colleagues of his generation.

The event also honoured everyone who, in the last year, has made a donation to the Library and Historical Archive of the COAC.

At the end of the ceremony the photograph exhibition entitled ’50 Years of Architecture. 1967-2017’ was opened, featuring a collection of projects that the honoured members have completed during their careers, which will be on show in the Espai Picasso until 28 October.


View the ceremony and awarding of medals: