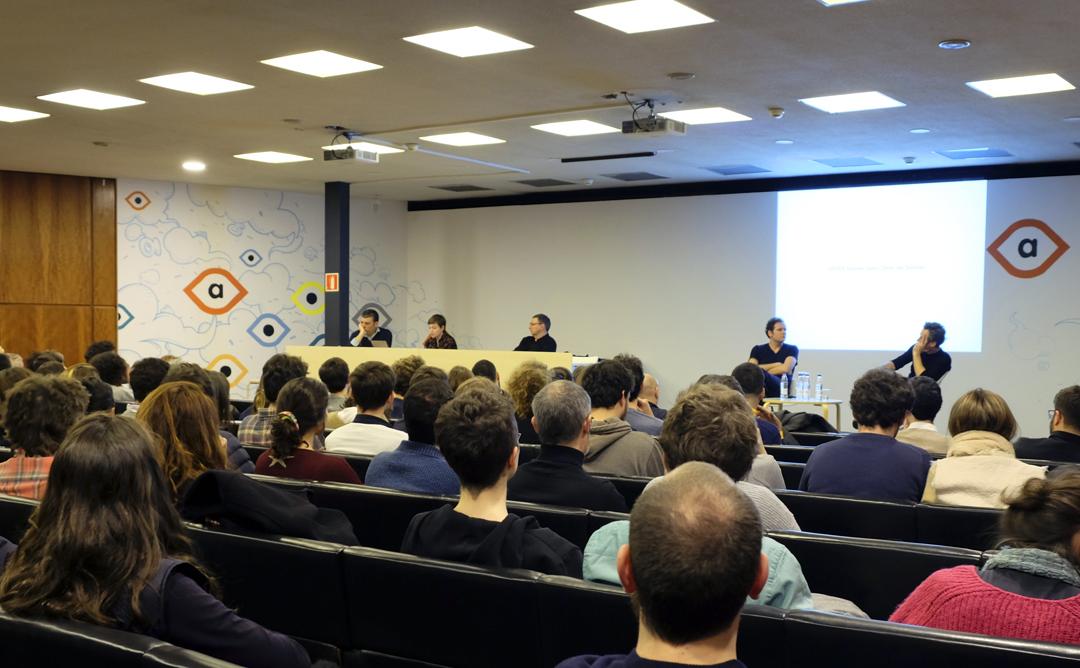 OFFICE KGDVS fills the auditorium for the first conference in the ‘Europe, Europe’ cycle

Imatge:
© Col·legi d'Arquitectes de Catalunya (COAC)
On Thursday, 26 January, the ‘Europa Europa’ cycle kicked off, curated by the architect and publisher Moisés Puente. Every 15 days until the month of June, a showing of European architecture will be presented, with lectures from 5 guest architects and 4 critics, and introduced by Catalan architects. The Belgian architectural practice OFFICE Kersten Geers David van Severen, introduced by Anna Puigjaner from MAIO architects, gave the first lecture in the series.

OFFICE KGDVS, founded in 2002 and established as one of the most original voices on the European scene, used the exhibition ‘Everything architecture’ as their theme (open until 12 February at the gallery Arc en Ciel in Bordeaux). The exhibition presents an overview of their work based on the interaction established between models, drawings and collages produced by the practice and the work of different artists.

During the lecture, the architects presented a total of seven designs – specifically the projects 56, 90, 117, 119, 126, 176 – from a body of work that encompasses more than 190 references. Behind this nomenclature, which classifies projects chronologically and tends to situate them on equal ground, there are 15 years of professional activity encompassing projects of all kinds that have been built worldwide.

During the first part of the lecture, OFFICE presented four projects with different typologies and scales, all located in Belgium: a weekend house in Merchtem, on the outskirts of Brussels; the expansion of a public school in Leuven; a single-family home project known as ‘Der Bau’ in la Garenne, Brussels; and an agro-industrial building that serves as a drying hall in Herselt.

The second part was devoted to presenting three international projects on different scales and in different contexts. First off was a cultural centre in the old city of Bahrain, which blends formally and constructively with its context while eschewing imitation. Then they showed the new headquarters for the Radio Télévision Suisse, still in the design phase, located on the university campus in Lausanne next to the Sanaa building, with which it blends almost seamlessly. Finally, they presented a single-family home in Matarranya, part of the Solo Houses project, for which a number of internationally renowned architects have been asked to design houses in a privileged environment with complete design freedom.

Whether you are already familiar with OFFICE’s work or you have yet to discover it, we recommend that you watch the video of the lecture, where you will discover architecture with a serious theoretical intensity. Rooted in rigour, strength and pure forms, it tends to generate non-hierarchical spaces where it seems like anything can happen.