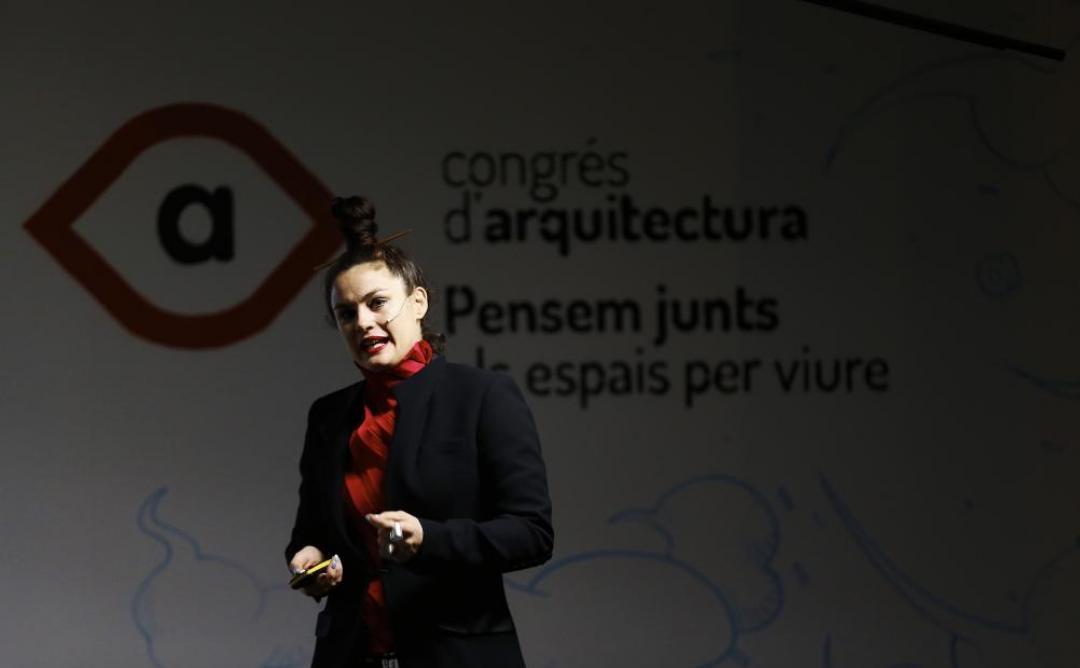 Eva Franch: "New perspectives are needed because there are new ways of understanding the world"

Imatge:
© Col·legi d'Arquitectes de Catalunya (COAC)
Transgressive. Even “uncomfortable”, the Dean of COCA, Lluís Comerón, went on to say about Eva Franch’s conference. Architect and curator, Franch is Chief Curator and Executive Director of the Storefront for Art and Architecture in New York. Based in said city, her professional practiced is characterised by relating experimental art forms, design and architecture.

The conference she made on 25th November at COAC’s conference hall - within the Architecture Congress - was the first one she pronounced in her native tongue: Catalan. This is a fact that exposes her global recognition. Franch started her speech explaining Storefront’s values, a small gallery which “generates debates which cannot take place in other venues, an experimental place, committed to issues like housing and precariousness, which poses questions nobody asks”. It also poses queries such as: how are cities to be built, now the world has nothing to do with the one a few years ago. “Before, a city was divided amongst areas to live, areas to work and areas of leisure. Now we must build a different type of city. We can live, work and have fun without having to get out of bed”. To Franch, the architect holds the responsibility and the privilege to articulate such responses, but “we often do not know what the questions are”.

This is why she and her team are creating projects such as 'Competition of competitions', a contest where architects themselves must be able to write up the bases of a competition to build the city people need and, therefore, select “that which is urgent”. The project awarded in said competition was, she said, the only one that, besides presenting what needed to be done, also posed what needed to be knocked down. Architects also work by substraction”.

“New perspectives are needed, because there are new ways of understanding the world”, which is why Franch advocates for building cities based on a new model. “Even neighbourhoods are old bureaucratic structures”, she said. “We now share more than ever: pictures, houses, cars… as a result of technological innovations”. This must influence architecture. In order to do that, Franch defends Storefront’s spirit: provocation. And she quoted her university professor Xavier Rubert de Ventós: “only what surprises us makes us think”.

Versatile, creative and natural born researcher, Franch has curated international projects and received numerous awards and scholarships. Her work has been internationally exhibited at FAD of Barcelona, the Venice Architecture Biennale, the Vitra Design Museum or the Shenzen Architecture Biennale, amongst other. Winner of the Suzanne Kolarik Underwood prize or the FAD prize for emerging architects, her strong academic and professional performance has been acknowledged with numerous awards such as the Howard Crosby Butler Travelling Fellowship (2006) or La Caixa (2005-2007). After graduating in Princeton, Franch lectured at SUNY Buffalo, New York, as a Peter Reyner Banham Fellow (2007-08) and at Rice University of Architecture, Houston (2008-2010) as Master Thesis Director. The work of Eva Franch has been exhibited at the Center of Architecture of New York, the Korea Institute of Registered Architects in Daegu, FAD Barcelona, NAI Rotterdam, the Shenzen Architecture Biennale, or the Venice Architecture Biennale. She has been a member of Schloss Solitude Academy in Houston, Texas (2009-2011), and has taught seminars and courses such as Ecologies of Excess, Atmospheres of utopia, Performing Representations, Utopia as Doubt, On Banality-On Metaphor, CityThemeCity or Syn-City: a political sensorium.
10/01/2017
Tornar