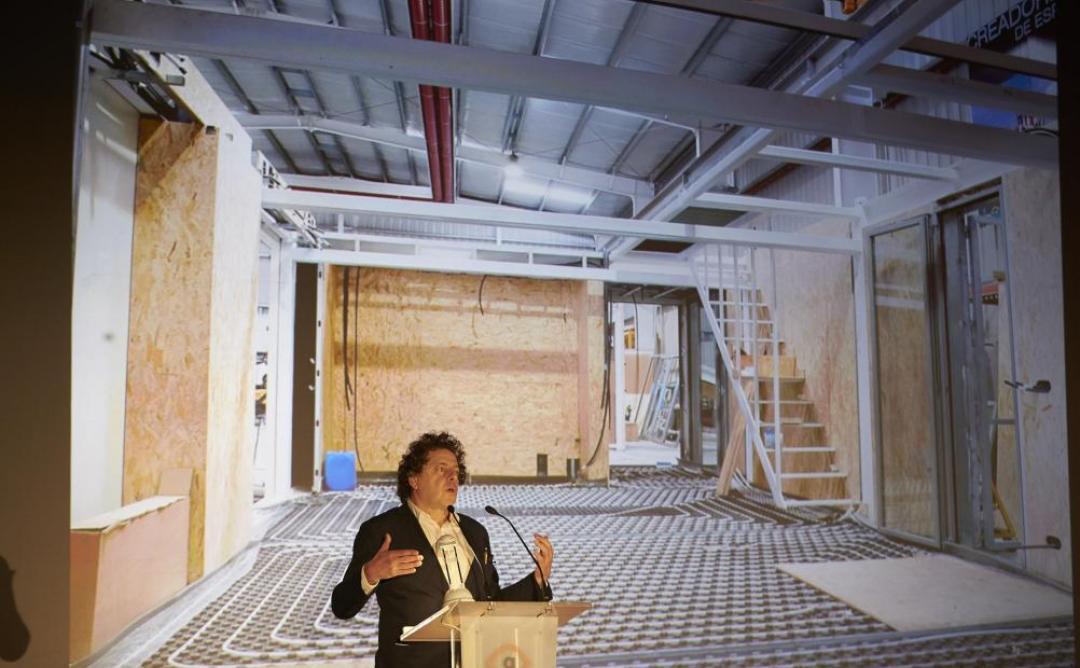 Juan Herreros: "The current architect is a DJ. The myth of the orchestra conductor has fallen"

Imatge:
© Col·legi d'Arquitectes de Catalunya (COAC)
Madrid-based architect Juan Herreros opened the closing session of the Architecture Congress, and did so with a lecture on architecture’s general interest and its values to improve cities, the land and people’s lives.

The architect was in awe of the works at the Sant Antoni Market, where the event took place: “when something is under construction, this becomes a worrying moment which consumes many people’s energy to be able to make something new, something which will remain over time and was built with a lot of effort”. According to Herreros, this is architecture’s complexity: moving a project forward. A complexity which, nowadays, in times of change, demands the full attention of architects. To Herreros, the complexity of new technologies lies not on the physical side of them (software, hardware…), but on how these act upon society and transform it in a way which was completely unknown up to now.

“The future of the practice of architecture is without drawings, without physical presence and without full control of the project” he stated. There are real-time production systems which allow instant decision-making, even without physically being in the office or the construction site. “We now have a global way of thinking which allows us to work in different contexts, and remotely manage local teams”. According to Herreros, the position of the architect who wants to control everything is now outdated. There is currently the opportunity to develop projects with experimental contents, which involve sharing grounds with other teams.

Herreros used the International Convention Centre of Bogota or the Torre Banco Panama as examples. They are buildings planned amongst various architecture studios and professionals from other disciplines, each of them focussing on their own section but, at the same time, adapting to the new times and evolving with the necessities of the moment. He explained that, in the projects developed in his practice, they now only draw a couple of floors, elevations and sections. Afterwards, distance allows for shape customization, as was done in Panama. At the CICB they got rid of ramps, stages, seats… to repurpose it to be more versatile than the classical convention centre. This way, the building got to integrate with the city and its people. “The contrast between a globalised vision and local knowledge, allows the environment to be read from different perspectives”, Herreros highlighted.

“The essential purpose of the architect is not convincing others that their project is the best, but listening and offering an analysis of what a city needs”. This is why, to Herreros, teamwork is essential instead of “as it used to be, when the architect was surrounded by helpers who would solve his problems”. “Architects are currently more like a DJ, they do what they can with what they have. They are not at the top anymore, but on the side. The myth of the architect as a one-man-band has fallen”.

To Herreros, global thought is one of the main strategies to explore the future of cities. “We need to understand that, when we do something around the corner, this is part of the world. And when we do something at the other end of the world, this says a lot about that place and about us”. Hence, he asks for reconnecting with the small efforts of any architect. “We have to tell society what our job consists of so they understand what we can do for them. Architecture must be essential in the construction of the future: a future that we know is going to be complicated. This is why we need our profession to be aware of what we can do for everyone else”.

Doctor Juan Herreros is a professor at ETSAM, professor at the GSAPP Columbia University and founding partner of Estudio Herreros. He has been a visiting professor at the University of Princeton, ITT in Chicago and the Architectural Association in London, amongst other. His works have been widely published, awarded and exhibited in both individual and collective exhibitions including the Spanish and Latin American Biennial of Architecture; MACBA; MOMA; and several Venice Biennale. His most outstanding works are the Munch Museum in Oslo; the Agora International Convention Centre in Bogota; the Art Gallery Carreras Múgica in Bilbao; the Torre Banco in Panama; the installation “Dialogue Architecture” at the Venice Biennale; or the public space “Communication Hut” in South Korea, amongst many other.
10/01/2017
Tornar