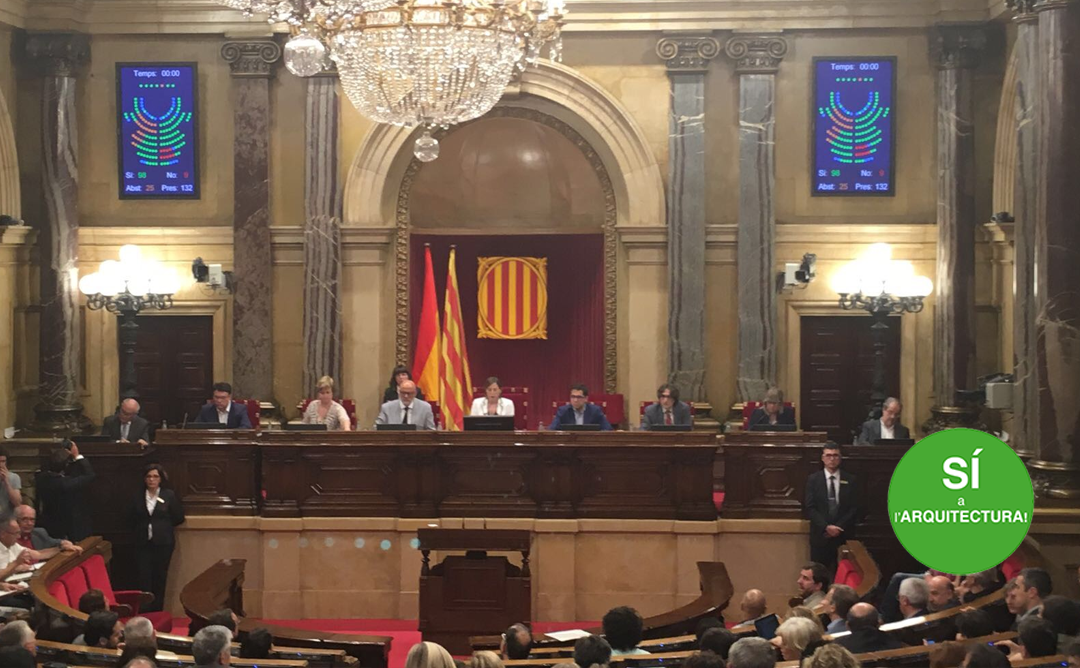 The Law on Architecture approved

Imatge:
© Col·legi d'Arquitectes de Catalunya (COAC)
Today, 28 June 2017, the Parliament of Catalonia passed the Law on Architecture, with 98 votes in favour (Junts pel Sí, Catalunya Sí Que Es Pot, Partit dels Socialistes de Catalunya and Partit Popular de Catalunya), 9 against (CUP) and 25 abstentions (Ciutadans), thereby concluding a process initiated four years ago by the Catalan Ministry of Territory and Sustainability with the backing of the Architects’ Association of Catalonia (COAC) and the collaboration of a wide range of bodies, organisations, schools of architecture and individual architects.

The Law passed today highlights the public interest value of architecture and has the chief goal of re-establishing the social value and mission of architects to improve people’s wellbeing. The Law thus gives concrete form to one of the Association’s priorities for some years, one that has been the subject of a number of actions, such as the Sí a l'Arquitectura! (Yes to Architecture!) campaign and the 2016 Architecture Congress, amongst others.

The Architects’ Association dean, Lluís Comerón, declared himself convinced that ‘the Law will help architecture to create more optimal living conditions and environments, and also improve the working conditions of the professionals involved’.

Catalan Minister for Territory and Sustainability Josep Rull described the new legislation as a ‘consensus-based, pioneering, inclusive, modernising and structural’ law. He also noted how ‘the Law covers all the aspects and all the professions involved in the architectural creation process’.

The key points of the new Law
The new Law contains measures that the COAC regards as essential, such as the formulation of architectural training content in education, the creation of new criteria and technical content for administrative management and procurement and, in the field of public procurement, the pre-eminence in evaluation criteria of architectural quality over economic considerations and the establishment of benchmark guide values for calculating prices in public procurement tender processes.

Four years of hard work
The origins of the Law date back four years, when the Catalan Ministry of Territory and Sustainability decided, with the COAC’s support, to commence the process of its drawing up.

Over this time, it has enjoyed broad-based support from the majority of organisations involved, including all of Catalonia’s schools of architecture, Arquinfad, and Arquitectes per l’Arquitectura, in addition to professional institutes and associations.

Check out the detailed timeline

A top-drawer European law
This new legislation follows on from a number of European Union resolutions and recommendations advising the fostering of architectural quality and highlighting the added value contributed by the sector, from both an economic and cultural standpoint.

In this regard, the Law on Architecture is the very first legislation of its type in Spain and the second in Europe, after the law passed in France in 2016.


FULL TEXT
Read the law on architecture published on DOGC