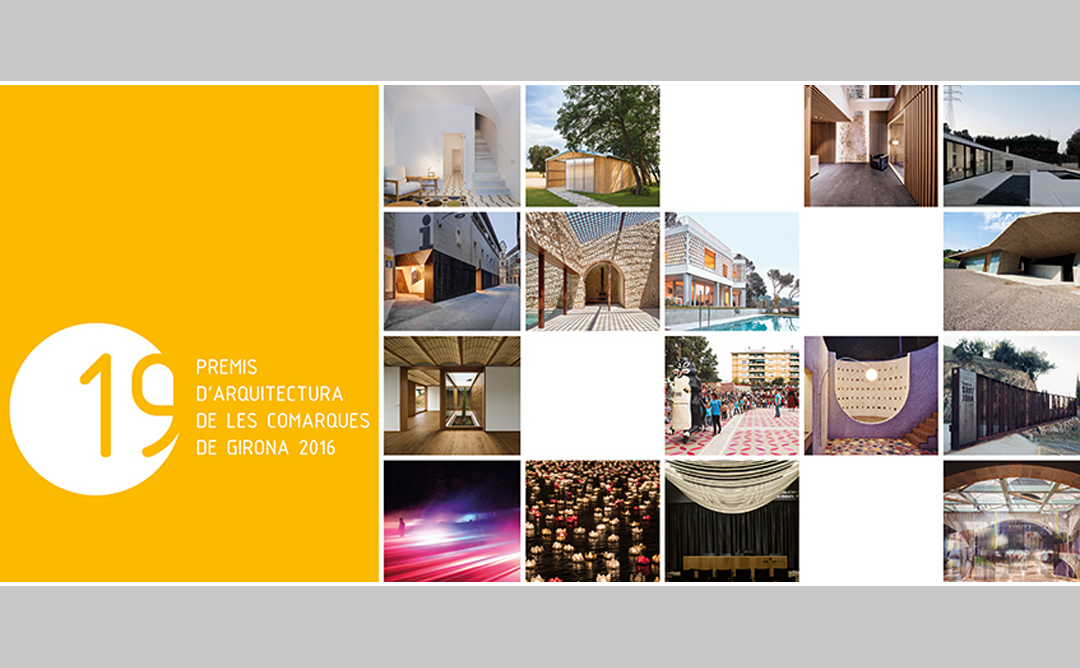 The event was attended by Agustí Serra, Director-General for Territorial and Urban Planning of the Government of Catalonia; Narcís Reverendo, President of the Girona branch of the COAC; Marta Madrenas, Mayor of Girona; Fermí Santamaria, Vice-president of Girona Provincial Council; and the architect Claudi Aguiló, representing this year's jury, chaired by the architect Andrew Groarke, who was unable to attend.

The event included the opening of the exhibition which brings together this year's selected projects in a set-up which uses three rolls of fabric deployed using metal carousels spread in rows throughout the entire exhibition room. The architectural projects are found amongst the hanging fabric—sketches, plans, images and notes—presented one behind the other, just like the outlines of the thousand conceivable architectural plans that the architect commits to paper. The exhibition was curated by the Col·lectiu La Mosca, created in 2012 to disseminate art and architecture and bring it closer to society, as well as encouraging architectural sensitivity and promoting social action to improve the quality of people's lives.

Just as in previous editions, the Architectural Awards of the Counties of Girona were made possible thanks to the support and collaboration of a variety of public bodies and private companies. As its main sponsors, this year's edition relied on the support Girona Provincial Council and Technal and Griesser; as sponsors, Ascensors Serra, Arcadi Pla SA, Itisa, El Punt Avui, iGuzzini, Diari de Girona, Cervera Global and the HNA (National Brotherhood of Architects); and as collaborators, Hotel Ciutat de Girona, LB Leopold Bautista SL Bulthaup Girona, Caves Llopart, and La Selva.

AWARD WINNERS 2016
In this, the nineteenth edition, the jury selected a total of 16 projects. The award in the 'Architecture' category went to 'Renovation of farmhouse in El Baix Empordà', by the practice Arquitectura-G (Jonathan Arnabat, Jordi Ayala-Bril, Aitor Fuentes and Igor Urdampilleta), and a mention was given to 'Reception Building at the Empúries Archaeological Museum', a project by Fuses-Viader Arquitectes. In the 'Outdoor Spaces' category, the jury chose the project 'Lluna Plena in Olot', by Eduard Callís and Guillem Moliner. No award was given for the 'Temporary Spaces' category.

As for the Jury Opinion Award, given by professionals from the world of cultural communication and management, architecture critics and professionals linked to the worlds of business and research, it went to 'Reception Building at the Empúries Archaeological Museum', by Fuses-Viader Arquitectes. The intention of this award is to reinforce the perception of architecture as culture and, in turn, influence the idea of architecture as a wide-ranging activity capable of capturing public interest.

ARCHITECTURE AS A CULTURAL ASSET
One of the noteworthy functions of the Architects' Association is to demonstrate the professional task undertaken by architects in disseminating the values of architecture in the context of society, something exemplified in their entirety by the Architectural Awards of the Counties of Girona. They have been held since 1997, and serve as a benchmark for architectural activity in the region. After nineteen years, they are seen as a point of reference for professionals in the worlds of architecture and construction.